Even before the January transfer window, Chris Smalling was an alleged target for Arsenal.

The Gunners have been in need of defensive reinforcements for quite some time, and while players have been brought in, the frail feeling emanating from that backline has been a struggle to get rid of.

Whether adding the Manchester United centre-back to the squad is the answer certainly isn’t a guarantee, but his performances for Roma this season have certainly helped his case, quickly becoming a fan favourite at the Serie A side and emerging as their defensive leader.

That’s why it isn’t entirely surprising to see Arsenal’s name mentioned once again, as Corriere dello Sport look at the Serie A side’s options going forward.

Presenting the article, it’s stated Manchester United ‘have an offer’ from Arsenal for the player, although no further details are given, simply explaining Mikel Arteta’s side have ‘asked for information’.

What could help the Premier League side’s case here is the Covid-19 outbreak, with Corriere explaining that returning home is a ‘concrete option’ for the Englishman due to the current distance between himself and his family. 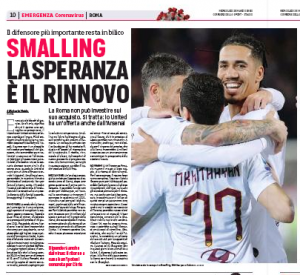 It’s up to the interested clubs to now convince Manchester United, who will undoubtedly sit down and decide what’s best for all parties going forward.

If Smalling pushes for a stay in Italy, then Roma’s only option, without Champions League money, would be to ask for a loan extension.

As for Arsenal, if they put an offer of €20-25m on the table, then they may get a chance to talk to the player, but as direct rivals to United these days, the Old Trafford brass might be reluctant to negotiate an intra-league deal.