We all know Thibaut Courtois is a big fan of Spain.

After all, he’s said so in many interviews and has made it clear that he’d like to return there one day, whether it is during or after his career.

Currently at Chelsea under Antonio Conte, the Belgian goalkeeper is preparing to face his former club Atlético Madrid, where he spent two seasons on loan from Stamford Bridge before establishing himself as the undisputed number one.

Ahead of the clash, Het Belang Van Limburg decided to have a chat with Courtois’ father, Thierry, and talk to him about his son’s love for Spain, including some habits he picked up during his time there that he’s finding hard to get rid of. 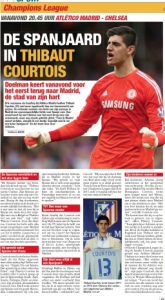 He said: “He doesn’t eat as late as when he was in Spain, but if you compare it to the time we eat in Belgium, it’s later”.

Raised speaking Dutch and French, the Chelsea goalkeeper barely speaks those languages anymore, mostly due to the strong Spanish contingent present at Stamford Bridge and to where he currently resides: London.

Thierry Courtois continued: “He certainly speaks those two languages more often than French. He speaks Spanish so often that sometimes there are some funny situations, like during the international periods, when he dares some French-speaking interviews and ends up accidentally saying Spanish words”.

Discovering Atlético Madrid’s new stadium, the Wanda Metropolitano, for the first time, the Blues’ star will also undoubtedly use the trip to go to his favourite restaurant, Ten con Ten, where he’s mostly likely eat breaded langoustines in chilli.

It’s amazing what you learn from parents.