When it comes to talking about Celtic, the Belgian press have one go to guy, and that’s Logan Bailly.

Spending two years at Celtic Park, the Belgian goalkeeper is now back in his home country, and ahead of the Champions League clash between the Bhoys and Anderlecht, Het Nieuwsblad sat down with the 31-year-old to discuss the team the Pro League champions are about to face.

Analysing the likely starters, such as ‘piece of furniture’ Mikael Lustig or the ‘monument’ that is Craig Gordon, there is one guy who keeps going under the radar, but who Logan Bailly feels has an incredibly bright future ahead of him: Jozo Simunovic. 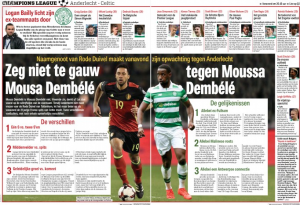 He said: “He’s a Croatian defender who’s in his third season at Celtic. He’s still young, but that guy is a machine. A beast. Despite his age, he is physically incredibly strong. A guy who will sooner or later cause a furore in the Premier League”.

Brought from Dinamo Zagreb as a 21-year-old for a very expensive £6.75m (by Celtic’s standards), the centre-back has been a great purchase for the Scottish Premiership champions.

Missing the second half of his first season due to a torn knee ligament, Simunovic gradually became a key member of Brendan Rodgers’ squad during their unbeaten campaign, making 33 appearances in all competitions, scoring one goal and picking up two assists.