Everything that happens with Maurizio Sarri’s career appears to happen very slowly.

When he was leaving Napoli for Chelsea the whole thing turned into a saga, with both Antonio Conte’s prolonged exit from Stamford Bridge and Sarri’s issues forcing his way out of the Italian club.

Now he’s thought to be on the verge of leaving the Europa League winners, everything again has felt like it’s dragged on for longer than has really been necessary.

It’s been claimed Chelsea want to make sure they have their new man all secured before allowing Sarri to go and manage Juventus back in Serie A. Frank Lampard is the most strongly linked, but things got so complicated last week that even Rafael Benitez was brought into the picture. 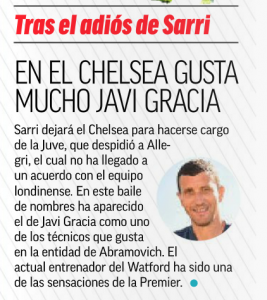 Marca’s back page on Saturday claims Chelsea ‘very much like’ Watford manager Javi Gracia. The Spaniard has been linked previously, as well as reportedly being of interest to multiple La Liga sides this summer.

They say he’s been a ‘sensation’ with his work in England.

It would seem unlikely he’d leave Watford right now, and the Hornets have previously shown they will not let go of a manager if they’re not ready.