Chelsea have been named among the interested parties in Getafe full-back Marc Cucurella this summer.

The left-back is currently on loan at Getafe from Barcelona, having made the move in the summer transfer window.

He’s found the consistent first-team place he was looking for away from the Nou Camp, making 34 appearances and managing one goal and six assists in them.

The loan deal includes an option for Getafe to make it permanent for €6m and, according to A Bola, they have told Barça they intend to activate that clause.

That’s because they plan to then sell Cucurella on for ‘a fortune’ in the summer as there as a long list of suitors lining up to sign him.

Chelsea are among them, according to the newspaper, alongside Porto, Napoli, Borussia Monchengladbach and Bayer Leverkusen.

As a result, Getafe know they can gain ‘high profitability’ from any sale, with the suggestion they are planning to create an auction for the 21-year-old.

No price tag is mentioned, but it seems any club looking to sign the Spaniard would have to offer considerably more than the €6m Getafe will be paying for his signature.

Chelsea being among the suitors alongside Porto is interesting given they have long been linked with a move for Porto’s Alex Telles. 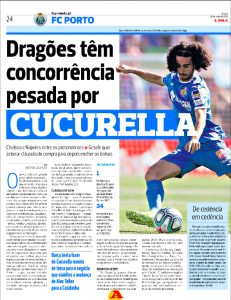 Indeed, A Bola’s report say the Portuguese side are eyeing up Cucurella as Telles’ replacement who is looking certain to leave.

There is a deal there to be agreed between all parties then if they work together.

For example, Chelsea signing Telles would give Porto the money to sign Cucurella and take away a competitor too.

As we know, though, few clubs are smart enough to work things out so transfers can go that smoothly.