Home Premier League Chelsea “Everything he gives to the team” – Player encouraged to join Chelsea...
SHARE

Chelsea’s chase for Porto left-back Alex Telles is everywhere in the Portuguese media today, with local outlets becoming confident that the Blues may move for the player.

In the morning, we covered a piece from newspaper A Bola saying the Brazilian could come out cheaper than it was initially expected.

That’s because his contract expires in 2021, and to avoid risking losing him for free, the Dragons could make a discount on his €40m release clause.

A Bola has one more story on Telles today, which is an interview they’ve made with former Porto left-back Rubens Junior. 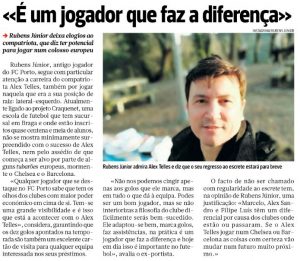 They asked him a few questions about Telles, especially regarding the rumours which have been surrounding him, and Junior says it’s all normal for a player of his quality.

“Any player who stands out at Porto knows that he has the eyes of the clubs with the greatest economic power on him. There’s great visibility and that’s what’s happening to Alex Telles.”

Regarding Alex Telles’ ten goals this season, Rubens Juniors says there’s even more to look at.

“We can’t just stick to the goals he scores, but everything he gives the team. You can be a good player, but if you don’t absorb the philosophy of the club, you will hardly be successful. He adapted well, scores goals, makes assists, in practice he’s a player who makes a difference and nowadays this is important for football.”

The former Porto player has also claimed that Alex Telles would have more chances with the national team in case he played for Barcelona or Chelsea.

“Marcelo, Alex Sandro and Filipe Luís have a differential because of the clubs where they are or have been at. If Alex Telles plays for Chelsea or Barcelona things will certainly change in the very near future.”