Leonardo Bonucci’s future is once again a topic of conversation in the Italian sport media. Last summer the Juventus defender was repeatedly linked with a move away from Turin, but it never felt like he’d actually leave, but was rather using clubs including Manchester City and Chelsea to help cement his status in Italy.

Perhaps that flirting didn’t go down too well with some, because there seems to be a crack in the relationship between Bonucci and Juventus ,and there’s regular doubts published via the Italian media.

Thursday’s edition of Gazzetta dello Sport reports that Bonucci’s agent has once again been putting the feelers out, and has been in contact with both Chelsea and Manchester City. However, neither side are quite as interested in the 30 year old as they may have been a year ago.

Neither City or Chelsea have made an offer, but Gazzetta believe Juventus would start talks at around €40-45m. That’s lower than last year, but with Bonucci a year older and his relationship with Juve a little more fractured, it seems fitting that a price drop has 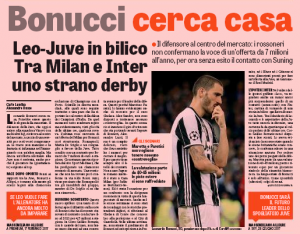 Even AC Milan are having a look, and Gazzetta say there’s claims of a €7m a year wages offer from the Serie A club. That would presumably be after tax.

Another summer of Bonucci doubt is ahead, and perhaps this time the player’s agent will push it too far and Juventus will actively work for a sale.