If you live in Italy, you will have heard of Nicolo Zaniolo, mostly because the local press will not stop going on about him.

They might have some reason to, after all, since the 19-year-old has taken Serie A by storm this season, quickly becoming indispensable to Eusebio di Francesco at Roma.

However, such clamour attracts attention, and Gazzetta dello Sport reckon Chelsea, managed by Maurizio Sarri are among those now in the queue keeping an eye on Zaniolo.

Of course, they aren’t the only ones, with Real Madrid, who have faced him personally in the Champions League, and Juventus, who are adopting the Bayern Munich strategy in Serie A of signing all of the good players in teams around them to stop the competition, also lurking in the shadows. 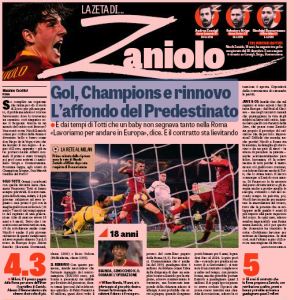 Despite all the attention, it would take a lot to pry Zaniolo away from his current club, as he’s very happy there, enjoying regular football and already a fan favourite.

On top of that, clubs like Chelsea will have to act fast to convince the youngster to join them in what would be an expensive transfer, as Roma currently value him at around €40m and are planning to give him a new five year contract at the end of the season to keep him around until 2024.

Maurizio Sarri might like him, but the chances of being able to coach him at Stamford Bridge are slim.