Loaned by Juventus to Fiorentina, Marko Pjaca was meant to be one of the main parts of Stefano Pioli’s attack.

The former Inter manager has tried time and time again to get the Croatian to find some form, but the youngster’s inconsistency saw him be the centre of attention in January, with the Serie A champions trying to see if they could send him elsewhere.

A brief story about Fulham’s interest appeared at one point, but Corriere Fiorentino on Tuesday reveal it was Newcastle United, trying to get a variety of deals over the line towards the end of the window, who came knocking last.

The Magpies, who signed Miguel Almiron for a club record fee as well as Antonio Barreca on loan from AS Monaco, wanted to add more creativity to their frontline. 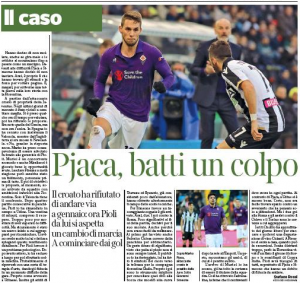 However, the 23-year-old, despite having the chance to join St James’ Park or the Mestalla, decided to say ‘no thank you’ and try and break through at Artemo Franchi stadium.

With just one goal and one assist in 17 league appearances this season, and just 37 minutes of first-team football under his belt over the last four, he’s got a long way to go.

Perhaps a move to England, where Rafa Benitez clearly would have counted on him might have helped, but he decided to stay and fight.

Let’s hope, for his sake, it pays off.

Fulham pushing ahead of competition for signing – And that could...

Agent set to receive offers for midfielder – Wolves pointed out...