Chelsea saw their €50m bid for Jules Koundé turned down by Sevilla last week, according to the Spanish slant of the saga.

On Monday, reports from Spain indicated the Blues have informed the defender’s agent they will make ‘one last attempt’ to sign the player.

AS on Tuesday explain the La Liga side have informed Chelsea the centre-back’s asking price will be increased to €80m in the last 48 hours of the transfer window.

Since making the €50m proposal, the report says the Champions League winners ‘did not respond throughout the weekend’ and decided not to raise the proposal.

The newspaper further adds there was ‘another negotiation attempt’ from them on Monday, but it was ‘already late’.

Last Friday, the France international travelled to Paris after requesting to be left out of the squad for the clash against Elche.

The 22-year-old was hoping a move to the west London club would go through, but that hasn’t 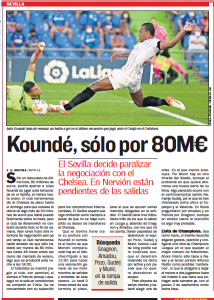 progressed as he had hoped for.

According to AS, Koundé will be separated from Sevilla only if Chelsea decide to pay €80m on the final day of the window.

If that doesn’t happen, Julen Lopetegui’s side expect the player to continue ‘performing as usual’, after his wish to join Chelsea ‘has not been fulfilled’.