Jules Koundé has been heavily linked to Chelsea and Julen Lopetegui left the centre-back out of his squad for Sevilla’s clash against Elche over the weekend.

The Blues reportedly made a €50m offer last Thursday, but it was deemed ‘insufficient for almost everyone’ at Sevilla.

That’s according to Diario de Sevilla, who add the minority within the La Liga side’s board, with ‘strong executive power’, were willing to ‘give the green light’ for the 22-year-old’s sale.

The defender has put pressure on Sevilla to get a move away from the club and he’s ‘now eager for Chelsea to match the pressure’ he put on the Spanish side. However, there has been no signs from the Champions League winners so far.

Within Sevilla, they are convinced the best option for the France international is to stay for one more season, if the Blues don’t return with an improved offer. 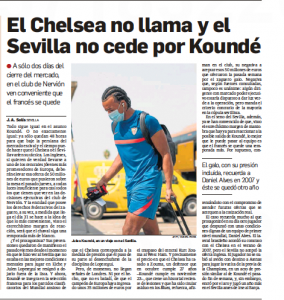 Today’s edition of ABC Sevilla has a report on the player, titled: ‘Between Koundé’s nerves and Sevilla’s position’.

They state: ‘The summer soap opera, with Koundé as the main actor, must be resolved in the next few hours, according to what Chelsea has sent to the defender’s representative. At least, that is the intention of the English club, sure to make one last attempt to hire the French player’.

It’s said Kurt Zouma’s €35m sale to West Ham United would give Thomas Tuchel’s side the ‘chance to make one last push’ to sign Koundé.

Chelsea, who were under pressure from the player, considered the €50m fee should be 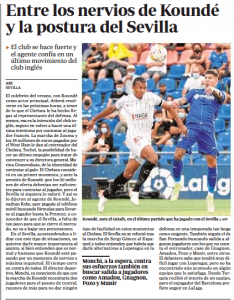 enough to take him out of Sevilla, but it wasn’t taken into account by Lopetegui’s side.

Koundé’s agent Jonathan Kebe is looking for various formulas to take his client to London, but Sevilla informed him yesterday they will not lower their demands for the Frenchman.

In other words, if Chelsea don’t make an offer high enough to please Sevilla, Koundé will continue where he is.