Wolverhampton Wanderers are keen to sign Duje Ćaleta-Car and he’s the ‘first candidate for a departure’ at Marseille, reports L’Equipe on Tuesday.

The defender has less than two years left on his contract and the Premier League side converted their interest into a proposal in recent days.

It’s claimed Marseille’s leaders were waiting for the English clubs to ‘wake up’ and that’s exactly what happened when they received an offer of €18m from Wolves.

Although the Ligue 1 side received a ‘nice sum’ for the centre-back, the file has not progressed well, mainly because of the player.

The 24-year-old isn’t ‘motivated by the idea’ of joining Bruno Lage’s side, especially after his partner gave birth to their first child last week.

Despite the stance maintained by the Croatia international, the newspaper says Marseille 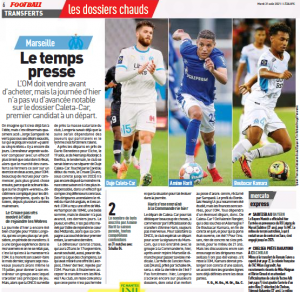 remain convinced the door isn’t closed for his exit as they continue to hope the situation will change on deadline day.

Ćaleta-Car is no longer essential for Jorge Sampaoli and L’Equipe add his exit could unlock a ‘lot of things’ for Marseille.

It’ll be interesting to see how this case develops as the day progresses.