We first started covering Laurent Depoitre when he was getting ready to leave AA Gent, available for a fee of less than €10m, there was claimed interest from a number of Premier League clubs.

Tottenham Hotspur were one of those repeatedly linked, although Spurs interest did seem to be pushing things a little with the striker not really being at that level.

He eventually moved to FC Porto for around €6m and spent much of his time in Portugal in the football wilderness. Thirteen appearances, and just two goals, later he joined Huddersfield Town.

The fee was initially undisclosed but was never going to stay that way given Porto are obliged to release such figures for their accounts. It eventually emerged Huddersfield had agree to pay €3.8m, with even that only coming in stages.

Depoitre signed a two year contract and is close to the end of that, with his standing decreased further since the Porto exit. 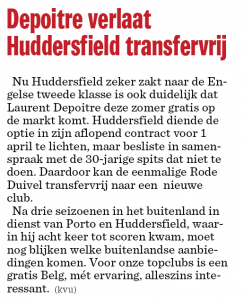 This season the 30 year old has zero goals in 25 appearances, not exactly the best sales pitch to new clubs.

Despite that, Het Nieuwsblad believe there will be interest from top clubs in Belgium, with the player ‘certainly interesting’ for them.

It’s now described as ‘clear’ that he’ll be leaving Huddersfield, with no new contract offer forthcoming.