Eden Hazard’s contract at Chelsea will run down in 2020 and he’s been constantly linked with a move to Real Madrid.

On the front page of Tuesday’s edition of AS, it’s stated the Belgium international and Paul Pogba of Manchester United are the ‘first objectives’ of Zinedine Zidane.

Last summer, Los Blancos signed Thibaut Courtois from the west London club and the goalkeeper then had less than a year left on his contract at Chelsea, which is why the Spanish capital club were able to sign him for a reasonable price.

The La Liga giants are hoping for a similar formula to sign Hazard from the Blues at the end of the season.

Real Madrid are waiting for the Court of Arbitration for Sport (CAS) to give their verdict on the transfer ban imposed by FIFA on Chelsea, so that they can close the operation for Hazard ‘as soon as possible’. 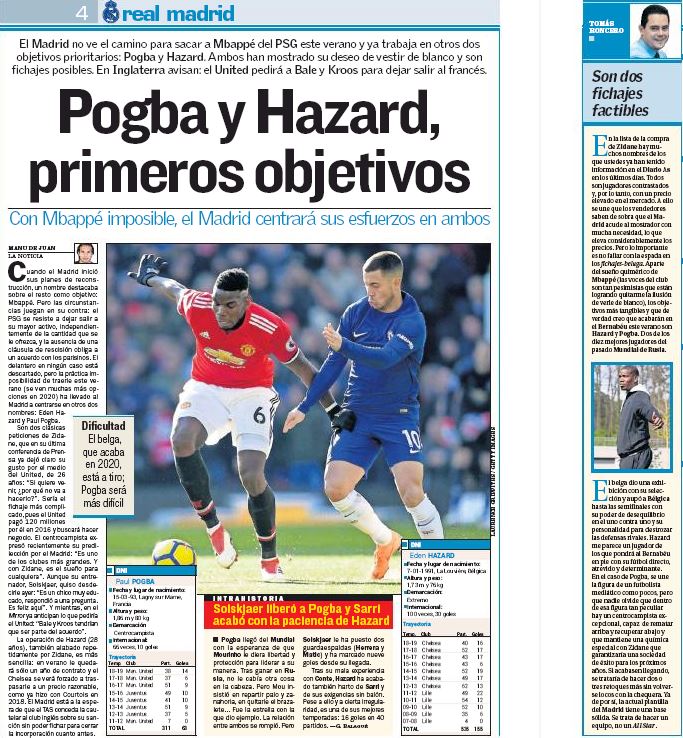 Another report from AS claims the forward is viewed as a ‘feasible signing’ for Real Madrid and it’s further explained the Premier League outfit are aware of the 13-time European champions’ interest in their player. 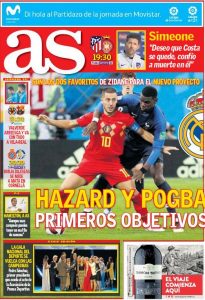 Hazard’s performances for his national team during the 2018 World Cup impressed the Spanish capital club and it’s hoped he can be a player who will make the fans at the Bernabéu stand on their feet with his ‘direct, daring and decisive’ football.

The slant from the Spanish press suggests Real Madrid are confident of landing Hazard in the summer.