Fotomac report Fenerbahce are interested in signing former Liverpool striker Daniel Sturridge but Rangers and Celtic also want to bring in the 29 year old this summer.

Sturridge is to be released by Liverpool at the end of this month, and has the possibility of joining the Turkish club on a free transfer. Fotomac say the Yellow Canaries are seriously considering signing the player but will face competition from Celtic and Rangers.

Both Old Firm clubs will be looking to strengthen their squads in this transfer window and there’s a chance the attacker could be reunited with his former Liverpool teammate Steven Gerrard at Ibrox.

Gerrard is going into his second season with Rangers and he will be aiming to close the gap on Celtic. Alfredo Morelos likely needs some competition, if only to stop him losing his head so often.

According to the Turkish newspaper, Fenerbahce want to sign both Max Kruse and Daniel Sturridge as they aim to challenge for the Super Lig title next season. 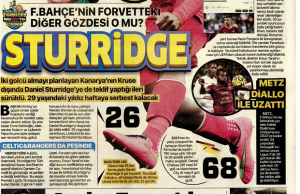 However, Fenerbahce must beat Rangers and Celtic for the player as it’s claimed both Scottish giants are seriously interested in signing him.

Sturridge made 27 appearances for Jurgen Klopp’s side last season, and scored 4 goals.