The German media are starting to give up on Bayern Munich signing Leroy Sane, and that’s clear because they’re giving reasons which make it sound like a fault on the player’s behalf.

A few days ago Bild claimed there’s something of a power struggle between Sane’s girlfriend and his mother, with the latter wanting him to return to Germany.

It sounded like pure gossip, but at least gave Bayern an excuse for losing the fight and failing to convince the Manchester City player on a move.

Now, in their Monday newspaper, Bild list reasons why the transfer is ‘increasingly unlikely’.

They lean on The Sun for some of the claims, and then push their own information.

It’s claimed Sane doesn’t want to be a ‘super newcomer’ at Bayern, with all the pressure and focus that would bring. Therefore he’d rather ‘go under the radar’ at Manchester City.

‘Under the radar’ and ‘Manchester City’ don’t really fit well together. 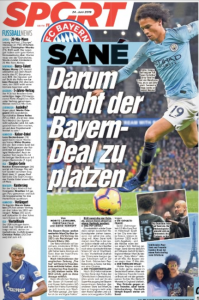 Money is then also blamed, with Bild saying Sane can earn more by staying in England for another year and then potentially looking at a transfer.

Finally, it’s back to the good old sexism, with the German newspaper stating: ‘Glamour friend Candice Brook wants to stay in England’

Blame the woman and the money. Well done Bild.