Home Europe Celtic transfer talked up in Italian newspaper, fee could prove to be...
SHARE

While it hasn’t been confirmed yet, there’s a reasonable chance Stefan De Vrij will leave Lazio at the end of the season on a free transfer.

The Dutch centre-back hasn’t signed a new contract with the Serie A side, and is yet to agree a deal with another side, but that hasn’t stopped their director of football from thinking about a replacement, and Celtic’s Jozo Simunovic is on that list.

This isn’t the first time the Croatian defender has been linked with a move to Italy, as Torino were also after his services last January, but never managed to get a deal over the line. 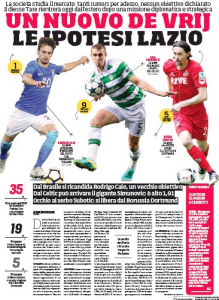 Having very recently signed a new contract at Celtic Park until 2021, it seems unlikely Lazio would be able to afford his services, yet Igli Tare has decided to look at him regardless.

At 23 years of age, Simunovic would tick the Lazio boxes quite nicely, replacing a soon-to-be 26-year-old who has been at Lazio for three and a half years, but they would have to convince both the player and Brendan Rodgers this would be a good move for all parties.

It’s just an idea for now, but we just can’t see Celtic letting him go on the cheap, even if he isn’t a regular starter.