Pretty much exactly a year ago, Frank Acheampong, then at Anderlecht, came close to signing for Hull City.

DH in Belgium reported in April the now Championship side had put forward around €7.5m for the Ghana international, only to see it turned down as the Belgian side wished to keep hold of the winger until the summer.

Eventually, the 24-year-old moved to China for around €6.5m (loan fee and permanent transfer combined), where he currently plays for Tianjin Teda.

Speaking to Sport/Foot in Belgium, Acheampong recalled his failed transfer to KCOM Stadium, and he wasn’t happy about it.

He said: “Everyone knows the story. Anderlecht refused! I had to stay to help the team win the title. I was angry, of course. Anderlecht stole my dream, and I didn’t hide it. 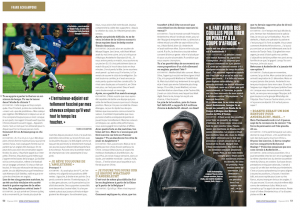 “In the end, the board eventually consented to let me go for a reasonable fee, on the condition that we won the title.”

In the end, Marco Silva ended up buying Kamil Grosicki to make up for missing out on the Anderlecht player, with the Poland international still at Hull City, where he was a key part of Leonid Slutsky’s side during the first half of the season.

Nigel Adkins appears to be a big fan of him too.

It seems the only one that lost out here was Acheampong, and he won a title in the process.