Two weeks ago, we covered an interview from Leandro Trossard’s agent, who confirmed interest from Arsenal and Wolfsburg in signing the Genk star.

Four days later, Het Belang van Limburg reported the Bundesliga club are ahead of the Gunners, largely due to expected playing time.

The winger has been in fine form for the Jupiler Pro League club this season, scoring 22 goals and registering nine assists across 43 matches in all competitions.

Another Belgian outlet, Het Nieuwsblad, have now interviewed the player’s representative Josy Comhair and it’s published in today’s edition of the newspaper.

Comhair explains the time has come for his client to join a new club, but a decision needs to be taken whether Trossard has to take a small step or make a big jump.

“There is no agreement with any club yet. But I think that Germany is a beautiful country for him. You can take it one step higher via Germany,” Comhair said.

“Because with Arsenal you are immediately at the highest level and you can almost only go down. But yes, it can also be Arsenal.” 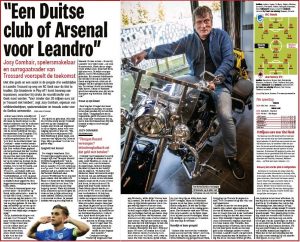 The wideman’s agent further stressed that potential suitors will have to pay at least €20m to Genk to secure Trossard’s services.