Leandro Trossard has scored 20 goals and registered eight assists in all competitions for Genk this season.

As revealed by his agent last November, Arsenal are keeping a close eye on the 24-year-old’s development with the Jupiler Pro League club.

Earlier this month, we covered claims from Voetbal Belgie, who explained the Gunners were told the negotiations for the winger ‘could take place’ from €20m.

Belgian newspaper Het Laatste Nieuws now brings the latest update on the wideman and they claim the player is ready to take the next big jump for the development of his career.

HLN talks to a few people who are/were associated with Trossard, including his former coaches at Westerlo and Lommel United, where he had spent time on loan in the past.

The newspaper also gets comments from his agent Josy Comhair, who confirms Unai Emery’s side and Wolfsburg are interested in securing his client’s services. The representative provides further more details. 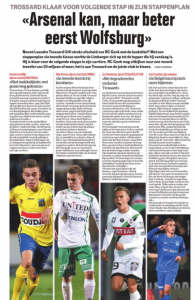 “Arsenal could (sign him). But for his career it might be better that he first go to a club like Wolfsburg. If he plays there for two years, he can still go to Arsenal. If he goes straight to Arsenal and you don’t play there, then it might be mentally harder for Trossard,” claims Comhair.

Whether or not Trossard and his agent are willing to take the risk of joining the north London club in the summer is to be seen.