Leandro Trossard of Genk has been on Arsenal’s radar for several months.

Last November, his agent revealed the Gunners told him they will keep an eye on the 24-year-old’s development this season.

On April 19th, the forward’s representative Josy Comhair gave an interview to Belgian newspaper Het Laatste Nieuws and revealed interest from the north London club and Wolfsburg in signing his client.

Another Belgian newspaper, Het Belang van Limburg, brings the latest update on the situation regarding the interest two aforementioned clubs, who they say have scouted him on several occasions this season.

The headline of the report reads ‘Wolfsburg pushes ahead for Trossard’. The German club are planning to talk to Trossard’s agent this week as they’re serious about bringing him to the Bundesliga in the summer.

Trossard is of the belief that he will end up playing more at Wolfsburg than at Arsenal, which is why the former are in ‘pole position’ to acquire his services.

For the deal to take shape, Wolfsburg have to find an agreement with the Jupiler Pro League outfit. 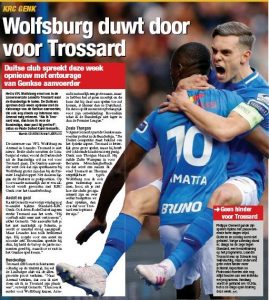 HBVL’s report is unlikely to provide positive news to Unai Emery’s side and the only way they could possibly beat Wolfsburg to Trossard’s signing is by submitting a higher bid for the player.