Euro 2020 being turned into Euro 2021 made a lot of news in the Netherlands. Aside from the obvious reasons, the coverage was due to the Oranje injury situation and their manager Ronald Koeman.

The Netherlands would have struggled to get some of their key players fit for this summer, so the delay is actually a boost in that regard. When it comes to Koeman, it’s long been known he has an exit clause allowing him to leave the Dutch national team after the Euros and move to Barcelona should he be offered the job.

A delay of a year meant there was worry he could still move to the Camp Nou this summer, but Koeman confirmed earlier this week that the clause just rolls on for another year.

Marca have spoken to the manager, and after general questions about Dutch and Spanish football, they asked if Barcelona had contacted him a few months ago when they dispensed with the services of Ernesto Valverde.

Koeman confirmed it: “They called me and I said no, because of the commitment I have with the selection of my country, after two years there is a possibility to continue, I have 2 and 2, that is to say that after Euro 2021 it will be time to evaluate. Two years for each tournament. I couldn’t leave the Netherlands three months before a competition.”

Marca put it to Koeman that it would have been a risky time to take over Barcelona anyway, and he disagreed: “No, I don’t think it was a bad time. What happens is that I have my reasons with the Netherlands. Barcelona can always win important things, they have very good players, the options of being able to sign the best footballers… If I had been without a job, of course, everyone likes Barca. It does not matter when or the situation you are going through. There, in Barcelona, ​​I lived my best stage as a footballer and I am very fond of the city. So I hope I can be a coach for the Barca team one day.”

The Spanish newspaper wanted to know what Koeman thinks about Frenkie de Jong’s adaptation to Barcelona, and the manager wasn’t afraid about being honest: “It is important that he plays games, but you can argue that if it’s in his position. In the 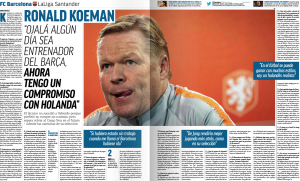 Netherlands, he plays further back but we do it with two pivots, and at Barca he plays with only one and two midfielders, or sometimes with four midfielders. His position now is different from the Dutch national team and Ajax. This is how you learn to play higher, it is not all negative, but it is not his best position. For me, it is further back, there I think he would have better performance.”

Quique Setien is no doubt thrilled.