It’s stated the Championship will pay a ‘decent fee’ to sign Larin, which will come as a blow to Besiktas.

The Turkish side gave Zulte Waregem the option to sign Larin at the start of the season when they loaned him to the Belgian side. They can activate his redemption clause, which is set at €2.5m, to sign the player, and they could be set to make a quick profit if they sell him to the English club.

Leeds United were linked with a move for Larin when the Canadian striker was playing for MLS side Orlando City, but he decided to join Besiktas. During the last window there was again reported interest from the Elland Road side.

During his time in Turkey, Larin struggled for form and was loaned out to the Jupiler League side last summer and has been impressing since his arrival. 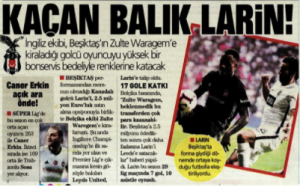 Larin has made 33 appearances for the Belgian club this season, scoring 9 goals and providing 11 assists.

His contract with Besiktas will expire at the end of June 2022.