Once a (brief) Premier League regular at Aston Villa, Yacouba Sylla’s career took a turn for the worse with a loan to Turkey following by a less than successful transfer to Rennes in France.

Loaned out to Montpellier this season, the 26-year-old only played a bit-part role, and with the two French clubs failing to agree on a buy-out price, the defensive midfielder is expected to return to Rennes in the coming weeks.

However, it seems unlikely he’ll be staying there beyond this season as L’Equipe on Thursday explain a few clubs have already made their interest clear, including Brighton & Hove Albion.

Recently promoted to the Premier League, the Seagulls will be wanting to add experienced players, preferably with knowledge of English football, something Sylla has from his time at Aston Villa.

While he might not be the most reputable player around, the Mali international would certainly bring quality in depth and toughness to Brighton’s squad. 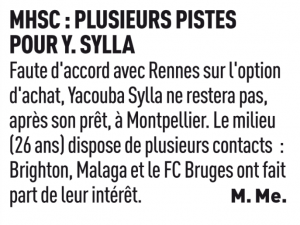 Plus, considering his situation, he shouldn’t be the most expensive purchase, and that’s also something Brighton will be keeping in mind, who are said to face competition from FC Bruges and Malaga for his signature.

You would think the appeal of Premier League football at the Amex Stadium would be too good to refuse at this stage in his career.

Buying Sylla from Aston Villa for just over £1m, Rennes will want to make their money back, but his performances are yet to justify them asking for anything more.