Fanatik have today reported Galatasaray are looking for a helping hand from their former player Didier Drogba as they get ready for crucial talks to sign Manchester City’s Wilfried Bony.

Galatasaray CEO Cenk Ergun will fly to England next week, and talks to sign the Manchester City forward will be on his agenda. Fanatik say Galatasaray are looking to Chelsea legend Drogba to help in the initial talks before an official offer is made to Manchester City.

The Turkish newspaper claim Galatasaray are looking to loan Bony, and plan to offer him €3m per season. 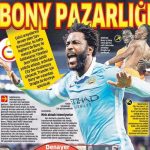 However, the Galatasaray board are concerned about Bony’s injury record and subsequently they’ve made it clear to the Manchester City player he needs to pass a detailed medical before making the move to Turkey.

Bony struggled to make an impact during his season long loan spell at Stoke City, with reports he clashed with Mark Hughes. The forward played just 10 games for Premier League side, scoring 2 goals.