Home Europe Club have ‘informed themselves’ about signing West Ham star – Would be...
SHARE

When West Ham bought Felipe Anderson, a few eyebrows were raised, but when a Premier League club is willing to spend close to £35m and offer the player a hefty pay rise to play in England’s top tier, it’s a hard deal to turn down.

After all, the Brazilian was one of the better performers at Lazio, and many thought he might have aimed a little higher than the Hammers (no offence intended).

Still, Anderson moved to London Stadium, and it’s been a good match, as the winger has scored 11 goals and assisted another 10 in 64 games.

However, with the Hammers in a precarious league position, it wouldn’t be surprising if the 26-year-old was thinking about moving on, and there was a brief moment when Napoli had the idea of bringing him back to Italy. 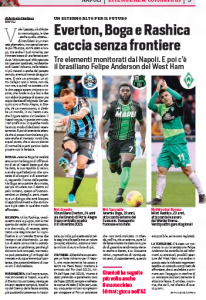 That’s what Corriere dello Sport are claiming on Wednesday, stating the Serie A side ‘informed themselves’ on an ‘eventual, possible opening from West Ham’.

Unfortunately, the price the Premier League club would have asked for and the winger’s wages would make it incredibly hard, but as the Italian newspaper put it, in these quiet days, ideas pop into your head and why not give them a go?