Arsenal legend Thierry Henry joined Belgium’s coaching staff as an assistant to Roberto Martinez in 2016, but after spending two years with the 2018 World Cup semi-finalists, the Frenchman could leave the national team.

It was first reported in England that he could join Aston Villa, and Belgian newspaper Het Belang van Limburg now back up that the 40-year-old is negotiating with the Villains to become their head coach.

Steve Bruce is currently in charge of the Championship club, who failed to achieve promotion to the Premier League following his side’s 1-0 defeat to Fulham in the play-off final. His future should be resolved soon by Villa’s new owners, Nassef Sawiris and Wes Edens.

HBVL claim it was always going to be difficult for the World Cup winner to manage in the Premier League, therefore taking charge at Villa Park will give him a perfect platform to kick off his career in management. 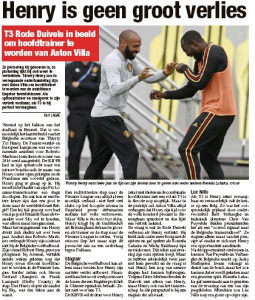 The Belgian football association are keen on retaining Henry, but they will not be able to compete with the English clubs in terms of wages.

Aston Villa, on the other hand, would want a 100 percent commitment from Henry, who would be forced to leave his position as Martinez’s assistant.