On Tuesday, we covered a story from Jornal de Notícias which claimed that free agent Rafael Leão had ‘almost’ signed for Manchester City, but was closer on a return to Sporting.

Having rescinded his contract with the Lions at the end of the season, the player would be interested in going back to his old club, which is now commanded by a new president.

But now newspaper Record comes up with a different take, saying that Leão’s agents are actually still negotiating with Manchester City.

The outlet claims that the player’s entourage was in England yesterday, and there’s now a ‘strong conviction’ that a deal can be found. 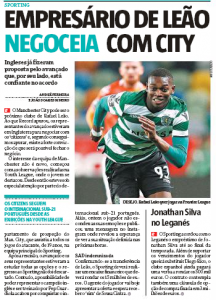 Record claims that Leão and his entourage have considered all the options on the table, and the chance to join the Premier League champions is the one that ‘conquered’ the player.

Just like has been happening to other players who are leaving Sporting after rescinding their contracts, Leão would still cost Manchester City a fee. The Portuguese media calls it ‘compensation’, and that’s basically a way to convince the Lions not to sue the clubs for getting their ex-players for free.

Record claims that Rafael Leão’s agents will present a €15m bid to Sporting today, expecting a positive answer from the club.

If that turns out as thought, then the youngster will very likely become a Manchester City player.