On Monday, Het Laatste Nieuws reported Toby Alderweireld ‘absolutely wants to leave’ Tottenham Hotspur and Manchester United are interested in the defender. He also hopes the two clubs can find an agreement before the transfer window closes on Thursday.

Het Nieuwsblad now claims Jose Mourinho ‘absolutely’ wants to bring in an experienced centre-back and thus, his side are in ‘pole position’ for the Belgian international.

The 29-year-old has one year left on his contract and Spurs have an option of extending it by one more year to keep him at the club until 2020. If that happens, then he will have a release clause of €28m.

Manchester United are in negotiations with Mauricio Pochettino’s side for the former Southampton man, but they have to deal with their chairman, Daniel Levy who is prepared to stretch it until the last few hours of the transfer window.

Spurs are demanding €65m for Alderweireld, a price tag which the Old Trafford club are unwilling to pay. 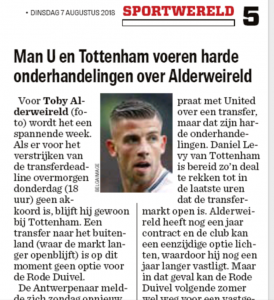 Tottenham are aware the centre-back wants to leave and it should be seen if they would be willing to reduce their asking price to cash in from his sale, rather than see his price drop next summer.