Barcelona and Paris Saint-Germain are involved in a transfer ‘war’ for Ajax’s Frenkie de Jong, as reported in Sunday’s edition of Sport.

Even though the Ligue 1 winners are confident of getting the deal over the line, the Blaugrana have not given up on the 21-year-old and are ready to fight until the end.

There is a further update about the Spanish champions’ latest approach in today’s edition of Mundo Deportivo.

The La Liga winners president Josep Maria Bartomeu, general manager Pep Segura, technical secretary Eric Abidal and his assistant Ramon Planes travelled to Amsterdam to visit the player last Thursday after he said ‘No’ to them over concerns of regular playing time.

Bartomeu submitted a few arguments as to why joining the Catalan club is better than making a switch to Parc des Princes. 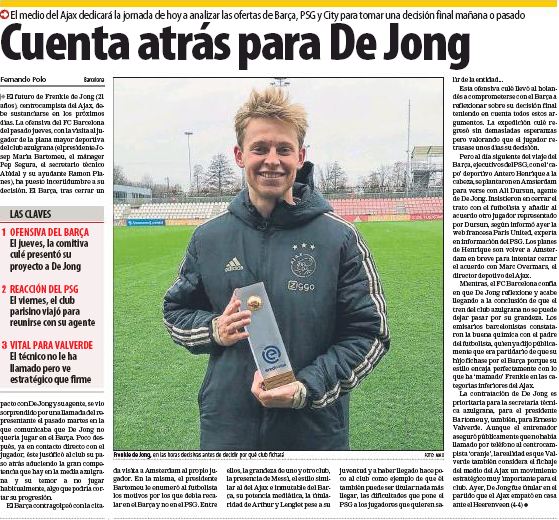 This includes an opportunity to play alongside Lionel Messi, the style of play being similar to Ajax and just how great the club is compared to their French rivals.

He also cited how difficult it is for the players to leave PSG, should they wish to.

Mundo reports the Netherlands international will consider all these arguments made by Barcelona’s chief while taking a final decision, but the Camp Nou outfit official returned without ‘too much hope’.

Today’s edition of Sport also relays the same information and adds that PSG will travel to have another meeting this week as they look to ‘definitively close the signing of De Jong’.

Mundo says De Jong will make a final decision either tomorrow or day after after analysing all the offers he has received so far.