Matteo Darmian is plastered all over the front page of Monday’s edition of Tuttosport, as his transfer away from Manchester United looks to be closing in.

As far as the Italian media would have it, the fullback has been on the verge of leaving Old Trafford on multiple occasions since he moved to the Premier League, and maybe this time the switch will finally happen.

Tuttosport shout out ‘Juve have chosen Darmian’, and say the Turin club have the Manchester United player ‘in hand’.

Juventus would sign the Italian on loan for the rest of the current season, paying a €4m fee to do so, and would then have the option of making the move permanent for a further €8m in the summer window. 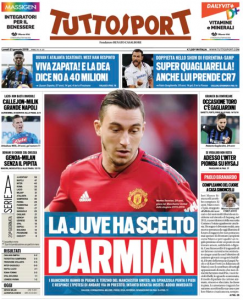 Darmian’s contract expires in June, but United have an option to extend by a further year and would use this to protect themselves against a potential free transfer.

However, first there needs to be a solution found for Leonardo Spinazzola, who would be leaving to make way for his compatriot.

The 25 year old isn’t as keen on a loan exit as Juve would like him to be, so there’s potentially a delay caused by that.