There is a claim in the Catalan media that Barcelona are holding talks to sign Chelsea attacker Willian and that a deal could happen.

Willian’s future at Chelsea has felt uncertain for a while and the club may not have taken kindly to some of his social media activity at the end of the season.

Mundo Deportivo say they’ve been able to back up claims from England of a possible deal. It’s reported Barcelona sources have ‘admitted’ the club have been working on a deal for the Brazil international for the past two weeks.

His agent Kia Joorabchian has good relations with the Spanish club, also representing  Philippe Coutinho. Willian has friendships in the Barca squad, and that’s seen as another positive on a potential deal. 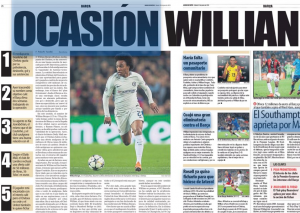 Recent reports in the English press say Barcelona have already offered €56m for Willian and that the player is happy with the interest from the Spanish champions.

Mundo Deportivo say the sources were unwilling to talk about figures, but did confirm talks with the player’s entourage. It’s not made clear whether Chelsea have been contacted directly yet.

Willian is contracted to Chelsea until June 2020.