Poor old Carpi are still working on half messages from Leeds United over the future of Jerry Mbakogu, and it seems the striker is being kept on the back-burner just in case the Championship club can’t find joy elsewhere.

Leeds United’s €3.5m buying option for Mbakogu expires today but that’s largely irrelevant. Given the English club weren’t keen to pay that much anyway, the status of the deal doesn’t change so much as things move into July.

Gazzetta di Modena have been the best at reporting the saga throughout, and it seems if Carpi know something then their local newspaper follow soon after. Saturday’s edition is therefore bright reading for Leeds United fans.

Whilst the Mbakogu deal isn’t dead, it’s stated Leeds have a new ‘priority’ in the transfer market, and that’s going for ‘more expensive’ options. It’s also claimed the club would prefer players experienced in the Championship, and Mbakogu doesn’t fit into either 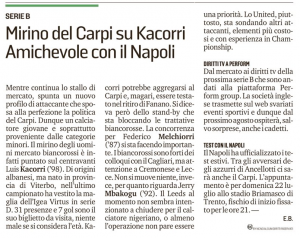 This all presents problems for Carpi, who seem a little lost with their own transfer business now.

If everything goes wrong with Leeds’ incomings, this may be one revived at a later date.

Tottenham have lost out – Hertha Berlin agree fee for Piatek, medical on the way

From Brazil: Details of Arsenal transfer revealed – Move could cost from €4m to €16m

Chelsea youngster has offers from Serie A and Ligue 1 for...

Tottenham have lost out – Hertha Berlin agree fee for Piatek,...

From Brazil: Details of Arsenal transfer revealed – Move could cost...