Home Europe Tottenham player is ‘a very valid option’ for transfer – Could get...
SHARE

Earlier this month, Tottenham Hotspur’s Jan Vertonghen told the Belgian media he will “write down the pros and cons” of options available to him for next season.

The defender’s contract at Spurs runs down in the summer and he’s already been linked with a move to Serie A, with Inter Milan credited with an interest in the 32-year-old.

Sport on Monday takes a look at players Barcelona can sign on a free transfer in the next window.

The north London club’s centre-back is included in the list, along with Chelsea’s Willian, Paris Saint-Germain duo of Thomas Meunier and Thiago Silva, and others.

It’s claimed the La Liga winners are ‘very attentive’ to Vertonghen’s situation because they view him as ‘a very valid option’ to strengthen their defence. The same is applied to Silva and Meunier.

One aspect of the Blaugrana’s summer transfer plans include focusing on players who will be available for free and Vertonghen is one of them. 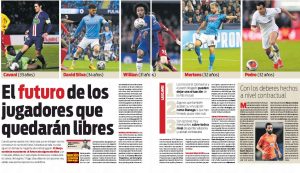 Barcelona can make moves for the Tottenham player as soon as they like, and it would surely be a very tempting prospect.