Barcelona’s hope of making it to the Champions League final was crushed by Liverpool on Tuesday and a day later, a stoppage time goal from Lucas Moura helped Tottenham Hotspur make it to the final at the expense of Ajax.

Friday’s edition of Mundo Deportivo claims the elimination of the two clubs from the Europe’s elite club competition will accelerate the ‘operation’ to sign Matthijs de Ligt.

It’s stated that ‘final steps’ are being taken by the Catalan club to ‘guarantee’ the defender’s signing in the summer, but the contacts between the two clubs will not be immediate since Ajax are still in the race for the title with PSV Eindhoven.

The Eredivisie club’s captain has constantly been linked with the La Liga winners ever since the latter agreed a deal with Ajax for Frenkie de Jong in January.

He remains a priority signing for Ernesto Valverde’s side and the teenager’s will is to play at the Camp Nou, which has been further backed up following the signing of De Jong.

The Dutch club have made it clear that De Ligt’s fee is set at €75m and will not look to further raise the asking price.

Ajax sporting director Marc Overmars is a supporter of the teenager joining Barcelona and this factor has to be taken into account because a few weeks back, he informed Juventus the centre-back prefers to join Barca. 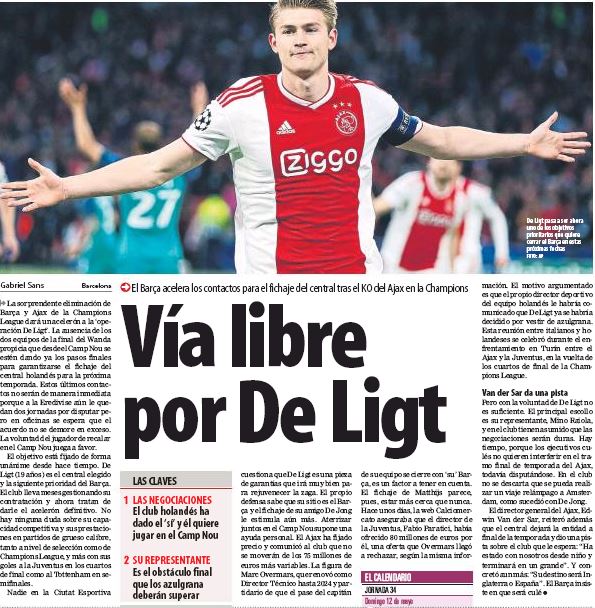 Barcelona now believe De Ligt’s transfer is ‘closer than ever’, but his agent Mino Raiola is the ‘main obstacle’, with whom the negotiations will be tough.

This backs up Marca’s claims on Thursday, which stated the agent is asking for 20% of the transfer fee.

Even though Mundo claim De Ligt is ‘closer than ever’ to joining the European giants, the operation to sign the player is not yet sealed.