Arsene Wenger is getting Arsenal to ‘intensify’ the pursuit of Andrija Zivkovic.

For months, Arsenal have been linked with a move for the Benfica player, with Arsenal scouts going to watch the Lisbon club’s matches regularly.

Arsenal had already been linked with Zivkovic when he was at Partisan and have followed his progress in Portugal. Record say the club have recently stepped up their interest, having seen the 21 year old perform well in a more central role as well as on the wing. 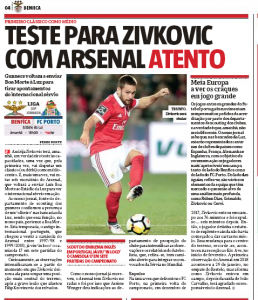 This isn’t unusual, Boa Morte has worked as a representative of his former club for some time, and scouts Portuguese league games for them.

Many English clubs scout matches in Portugal and there’ll be several at the match on Sunday, but it’s not usual that the media are so utterly convinced of a direct target.

For Record, there’s no doubt, Arsenal are watching Zivkovic again, and becoming increasingly interested in signing the Serbian international.