Portuguese newspaper O Jogo have a big claim in their Saturday edition on Liverpool and Bruno Fernandes.

Liverpool are said to be very interested in signing the Portuguese international. So much so that they’ve held meetings with the player’s representatives ‘with some regularity’ to try and find the best way to do a deal.

This makes some sense, especially given Fernandes plays for Sporting. The Lisbon club are notoriously difficult to deal with over transfers, as last summers circus with West Ham, over William Carvalho, demonstrated.

Sporting’s president Bruno de Carvalho is hot headed to say the least and recently suspended most of the squad after ranting at them on social media following defeat to Atletico Madrid in the Europa League. 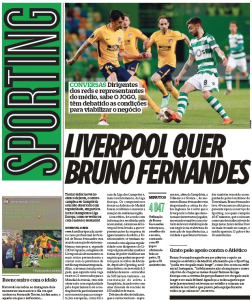 Fernandes has a €100m buyout clause, and that’s what Sporting will ask for. Such a sum is obviously too much money for the 23 year old so, if Liverpool are intent on signing him, it’s wise to have a plan of action which takes into account how Bruno de Carvalho behaves.

Appealing to his ego is probably a good idea, and formulating an offer with a big headline figure, but largely made up up of bonuses, could be the way to go.

O Jogo state Liverpool have regularly scouted Fernandes this season, including against Atletico.

Tottenham had earlier been linked with a move for the player.