Theo Walcott to AC Milan is a thing now, and it’s quite a big one in Italy, since Corriere dello Sport report the Arsenal winger has offered himself to the Serie A side in order to get more game time ahead of the World Cup.

This has already been well covered by the English press, who were quick to jump on it, but the newspaper version of the article holds a bit more information.

Unfortunately for Walcott, Corriere dello Sport explain AC Milan’s priority going into the second half of the season is to get a backup for Franck Kessié, and strengthening the attack hasn’t exactly crossed their minds.

That doesn’t mean they wouldn’t go for it, as the opportunity to sign someone like the England international, even if on loan for six months (with a view to buy), doesn’t pop up everyday. 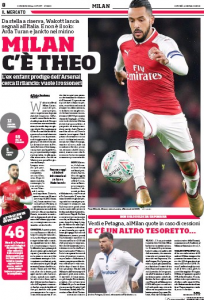 The 28-year-old ability to play on either side of the striker is certainly something that could interest Gattuso and co., yet for this to ever happen, Walcott would need to make some sacrifices, especially in the wage department.

Following their massive summer spent, AC Milan aren’t exactly in a position to match Premier League wages, especially for a player who has only played 49 minutes of league football this year.

That doesn’t mean he hasn’t been useful to Arsenal, with Wenger using him mostly in the Europa League, where he has impressed in his limited opportunities, scoring three goals and picking up five assists in five games.

This has come out of nowhere, and it’ll be interesting to see if it develops, as it’s not everyday we have an English player wanting to try something abroad when clubs like Everton and Southampton are also knocking on his door.