French newspaper L’Equipe once again go big with Kylian Mbappe in their Friday edition. The media in France are trying to get every inch out of the story and L’Equipe contradict claims they made themselves just a couple of days ago, but accuracy was lost a long time ago on the Mbappe road.

Arsenal are linked once again, as are Liverpool, as L’Equipe and others try to cover any conceivable angle. Whatever happens, the French newspaper can claim to have been correct, because they’ve predicted every conceivable outcome.

Taking up a little space in L’Equipe’s double page Mbappe spread is Thomas Lemar, and Arsenal links. A latest €50m offer from Arsene Wenger’s side is mentioned, but The Telegraph are credited with that, and the rest of the Lemar claims is L’Equipe going over old ground.

AS Monaco don’t want to sell, but could be tempted if someone offers way over the odds. Etc etc… 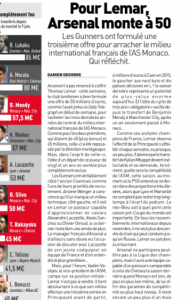 There’s an assumption all offers made by Arsenal up to now have been rejected, but it’s pondered the Premier League club could return again, with what would be a fourth bid, in ‘a few days’.

If the last offer was €50m then it follows that the next would have to be a minimum of €55m.

Should Arsenal get Lemar, it will be at a vastly over the top price, that’s accepted around the French media.

Maybe Arsenal, and others, could and should look elsewhere than Monaco for the rest of the window.