Arsenal saw a first bid for Gianluca Scamacca rejected by Sassuolo, who are demanding €10m more than the Gunner’s initial offer.

That’s according to Gazzetta Dello Sport, who say Mikel Arteta and co. could find an agreement if they up their limits.

The newspaper explains that Scamacca is being targeted by several clubs around Europe after impressing in Italy this past season.

Arsenal are one of those who are keen, and we’ve covered several reports from Italy about their interest in the last few weeks.

First, it was reported back in May that he was on Arsenal’s wish list of strikers this summer, and that was followed by reports they had made a €40m bid.

Gazzetta now back up the latter, stating Sassuolo have ‘already rejected’ Arsenal’s first bid, which was €32m plus bonuses for a total overall deal of just under €40m. 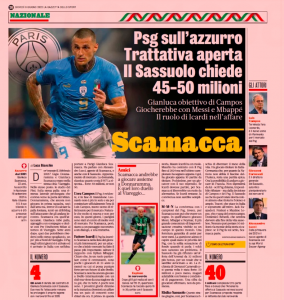 That’s not enough to satisfy the Italian side, who have taken a ‘strong stance’ in terms of a transfer and demanded at least €50m; a fee normally asked for established players, which Scamacca isn’t quite just yet.

That can be brought down slightly, and they are willing to be ‘adaptable with bonuses and payment terms‘, but either way, Arsenal need to up their overall package by at least €10m.

Whether they are willing to do so remains to be seen, but they might have to move quickly, with PSG lurking in the background and more than capable of matching Sassuolo’s demands if they want to.