There’s no doubt about it now, Gabriel Magalhães will be leaving Lille this summer, but the big question mark remains his next destination.

The Brazilian was said to have four offers in front of him not too long ago, but La Voix du Nord in France claim that has now be whittled down to two: Arsenal and Napoli.

This suggests both Everton and Manchester United are now out of the race, allowing the remaining pair to fight it out.

The French newspaper explain that despite all four clubs finding an agreement with Lille, their contract offers to the Brazilian ‘didn’t have the same wages’, leaving the Gunners and Napoli ‘in the final stretch’.

As La Voix du Nord previously reported, they reiterate Arsenal ‘remain the player’s priority’, but nothing was signed ‘as of last night’ (Sunday). 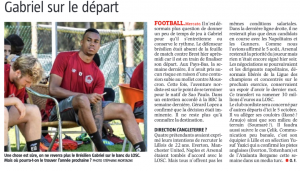 Napoli haven’t given up, ‘hoping to have the last word’, but regardless of what happens, the transfer will bring the Ligue 1 club around €30m.

It’s now up to the centre-back to decide, which has been the case of over two weeks now.

Why he hasn’t done so yet isn’t said, but perhaps there was hope either Everton or Manchester United upped their salary offers.

Since that hasn’t happened, his choice could be easier.