As reported by newspaper O Jogo, Arsenal scouts were present at Benfica’s league clash against Vitória de Guimarães this weekend.

According to the Portuguese outlet, there were two specific targets who the emissaries were keeping an eye on, and that’s no big surprise.

The players were defender Ruben Dias and midfielder Andrija Zivkovic, both heavily linked to Arsenal in the past couple of months.

Even though Benfica’s eagle Vitória, the club’s mascot, flew away from the stadium before the match, something completely out of the protocol, that couldn’t be considered a bad sign for long, as the home side still managed to get a comfortable 2-0 win. 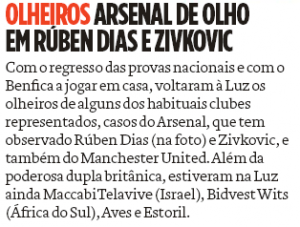 Both Arsenal targets had a solid display for the Lisbon side. Dias didn’t have much work and did what was needed to be done in defence. Zivkovic was the main man responsible for the team’s creation and did quite well, especially for having some freedom to move around the midfield.

Premier League rivals Manchester United have watched the game as well. Even though José Mourinho’s side have also been linked to these two players, it’s only Arsenal who had their targets identified by the newspaper this time.