This week’s edition of SportBild has a big feature on Borussia Dortmund refusing to sell players during the winter market.

This makes them all the more reluctant to part ways with squad members in the January transfer window.

First up, SportBild cover Christian Pulisic and interest from Chelsea, saying the Blues have tried to force a move in mid season but aren’t having any joy.

Then the magazine moves on to Julian Weigl, and reports Arsenal and AS Roma are interested in signing the 23 year old. For any chance of a deal, it’s made clear they’ll have to wait until the summer, so patience would be needed. 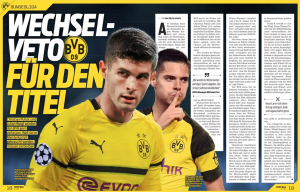 Weigl only has 151 minutes in the Bundesliga this season, and another 199 in the Champions League. Playing a similar position to Axel Witsel, he’s finding it hard to get prominence.

SportBild point out Weigl still holds the Bundesliga record for most touches of the ball during a match, 214 against FC Koln in 2016.