Arsenal’s ‘first approach’ for Lyon midfielder Houssem Aouar was €40m, which is ‘quite far’ from the €60m the French side were expecting.

Reports yesterday claimed that Arsenal had reached an agreement with the midfielder after months of rumours about a potential move.

Telefoot Chaine claimed that the first offer had come from the Emirates but failed to name the amount, with RMC following that later on by claiming the bid was €35m.

The latter did not explicitly state that it wasn’t enough to convince Lyon, but it was heavily implied that the Gunners would have to offer more.

L’Equipe have now had their say and reference the Telefoot Chaine report about a bid and the player already having an agreement with Arsenal.

They, though, say that the first approach was for a transfer worth around €40m, which is ‘quite far’ from the €60m that Lyon want to make if they are to sell their prized asset. 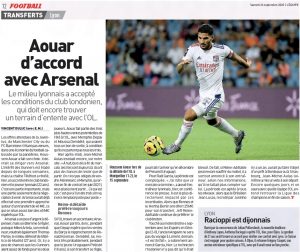 That makes it clear that Arsenal have some way to go before they can get their man, but the newspaper does say that if Lyon reach an agreement with them, then Aouar will definitely leave.

That would suggest the player is keen on the move and has been convinced by Arteta, as had been stated, but the Gunners, who have ‘a little money to spend’ need to get closer to the Ligue 1 side’s asking price before they can get anything close to completion.