Before the last international break in November, Barcelona’s Ousmane Dembele was in the news for the wrong reasons.

Tuesday’s edition of Catalan newspaper Mundo Deportivo claims, at that time, the France international considered throwing in the towel on his Camp Nou career by asking for a transfer away from the Blaugrana.

It’s claimed that Arsenal, Chelsea and Paris Saint-Germain were the clubs looking at the forward and they were thinking about taking him away from the La Liga winners for less than €140m.

Those clubs, with Arsenal linked the most, ‘thought they could take him away for less than the €140m he cost’.

Earlier in the summer, the 21-year-old felt threatened his time at the club could come to an end following the arrival of Malcom.

Ernesto Valverde also punished him for his poor attitude, but it’s claimed the player has put everything behind him now, which is why a move away from his current employer in January has been ruled out.

The ex-Borussia Dortmund man has a €400m release clause in his contract and Mundo claims the Spanish champions are now referring to it as his price tag. 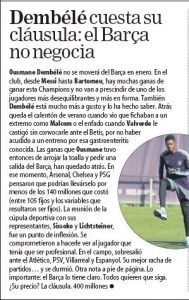 With Barcelona’s unwillingness to part ways with the player and the mammoth asking price, it seems an impossible task for the Gunners and the west London club to tempt Dembele to join them.

But given Dembele was reportedly two hours late for training on Sunday, this is one to keep an eye on.