In claims from France, RB Leipzig striker Jean-Kévin Augustin has emerged as target for Everton.

France Football has a story on the 21-year-old with a headline ‘Everton want Augustin’ and it looks like the Premier League outfit are eager to see the deal take shape in January.

The report mentions the player is not popular in his own country, France, after he refused a call-up for his national team’s U21 side’s clash against Luxembourg and Bulgaria in September.

Irrespective of his poor image in France, it’s claimed the former Paris Saint-Germain man has admirers outside his country and specifically from the English side.

The Merseyside club have already ‘advanced their pawns’ as they look to secure the services of the attacker in the upcoming transfer window. 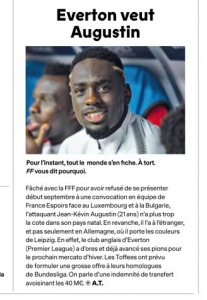 For this to happen, Marco Silva’s side ‘plan to make a big offer’ for the player, with a deal potentially valued at €40m.

Augustin has scored six goals for Leipzig in 17 appearances in all competitions this season, including only 10 starts.

Once these claims make it to the German media, it can’t be long before Everton’s Ademola Lookman is pulled into the equation.