Home Premier League Chelsea Player ‘on the launch pad’ for transfer, Chelsea will have to give...
SHARE

Chelsea’s Michy Bathsuayi is having a torrid time on loan at Valencia.

He’s scored one La Liga goal for the club this season and made zero assists. The goal came in September against Celta Vigo and he’s played 13 matches in the competition.

There’s also been four matches in the Champions League, and a solitary goal against Young Boys in October.

Valencia have had enough, according to multiple reports coming from Spain. The club do tend to blow hot and cold with their strikers and it wasn’t so long ago that Simone Zaza was being hailed as the real deal, before he reverted to type.

The Italian had been loaned from Juventus with an obligation to buy on a deal worth not far off €20m. Valencia had to go through with that, despite Zaza’s scoring touch vanishing, and now he’s on loan at Torino, who have a compulsory €12m purchase clause.

The 27 year old has scored once in Serie A this season.

Back to Bats, Marca say Valencia need to get rid of players to bring others in, and the Belgian is ‘on the launch pad’ for a January exit. 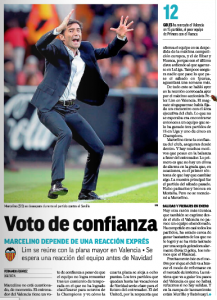 Los Che will have to get Chelsea’s permission to send him back, and a new loan club would surely have to be found.

Marca explain the poor form of Valencia’s strikers is a big reason Marcelino hasn’t been sacked yet, despite the club being in 15th position.

It’s thought the general play isn’t so bad, but that hapless strikers are ruining things. They’ve scored 12 goals in 15 matches, no La Liga side has scored less.