Last weekend, multiple reports from Portugal detailed Arsenal’s desire to get ahead of the competition for Sporting’s Tiago Tomás.

It was also explained Mikel Arteta and the Gunners technical director, Edu Gaspar, were fans of the 18-year-old.

A Bola on Saturday looks at the interest from European clubs in Sporting players, including Arsenal and Tomás.

The report focuses on how the valuation of their players has increased this season, despite not featuring in European competitions.

When discussing the young forward, the outlet points the Portugal U19 international’s valuation has increased from €2.5m to €6m. These figures are taken from Transfermarkt.

A Bola then explain Tomás’ current valuation is ‘still far from’ the €23m figure that is ‘already guaranteed’, with the north London club ‘willing to pay to stay with the promising player’.

A Bola then follows it up by stating, ‘…it is also known that these deals have other 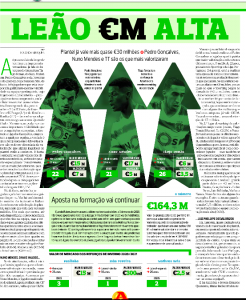 indicators in mind, which trigger the difference between the assigned market value and which is then settled between clubs’.

It’s not been made clear if Arsenal have guaranteed to pay €23m or if Sporting have been told [maybe from Tomás’ camp] the Premier League side are ready to offer that figure for the attacker.