Sporting will resist any effort from Arsenal to sign Tiago Tomás, in an attempt to push his asking price as high as possible.

That’s according to O Jogo, who say the Portuguese side aren’t as resistant to a deal for the youngster as has been suggested elsewhere.

A report in England yesterday claimed that Arsenal were keen on the forward and wanted to make a move as soon as possible to avoid a repeat of the mistake they made in not signing Cristiano Ronaldo earlier in his career.

It was claimed that both Mikel Arteta and Edu were fans of Tomás and wanted to make a move.

However, it’s believed that Sporting aren’t keen on a sale and A Bola backed that up today, stating that there had not been any concrete offers for the player at this moment in time.

Their stance was that Sporting would resist a sale as much as possible and that they would possibly refer to the €60m release clause if anything was to happen.

O Jogo say otherwise, though, and report the ‘strategy’ for the Liga NOS side is to ‘stretch the sale value to the maximum’.

They explain that those in charge at the club know that ‘good sales’ are ‘fundamental’ to financial health, and the €60m clause  is ‘difficult to achieve’. 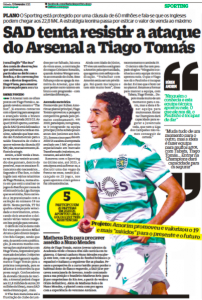 So they instead intend to ‘resist the Gunners’ harassment’ as much as possible in an attempt to stretch the deal as far, and high, as they possibly can.

The reports in England have stated that Arsenal could go as high as £20m (€22.8m), but Sporting want more for the player, who has enjoyed a ‘meteoric rise’ since last year.

The positive for Arsenal, though, is that Sporting are willing to do a deal, although it will take the Gunners digging deep in their pockets to get it over the line.

Any move will be dependant on where Sporting finish this season, though, with Champions League qualification making an exit less likely according to manager Rúben Amorim.

“Nobody knew him and this coaching staff bet on him. What Tiago gives us Paulinho is unable to give,” he said.

“And that is what is good to have in the squad. We are training to keep the team, with Tabata, Tiago Tomás…

“Then it changes a lot from one moment to another, but the idea is to make a team for many years.