West Bromwich Albion’s striker search in the winter market came to an end late in the window when Mbaye Diagne arrived on loan from Galatasaray.

It’s no surprise the Baggies also looked at other targets before completing the 29-year-old’s transfer and among them is Benfica’s Haris Seferović.

That’s according to A Bola, who say Sam Allardyce’s side tabled a proposal for the striker, but he ‘rejected an offer’ to join the Premier League side in January.

Despite turning down an opportunity to join West Brom, the Switzerland international, who has 12 goals and three assists in all competitions for Benfica, ‘dreams of England’.

Seferović’s contract with the Portuguese side lasts until 2024, but he plans on leaving Benfica sooner than that.

“I definitely feel very comfortable and enjoy my time here. Portugal is a very nice country and Benfica a great club, with which we play every year for titles. For me and my family, everything fits here,” he told Bluewin.

“Nevertheless, I cannot say for sure whether I will fully fulfil my contract with Benfica. I have to admit that there is a league that I would very much like to switch to.”

When asked where he wants to switch, he said: “The Premier League! I have seen a lot in my career and played in Germany, Spain, Italy and Portugal. Now I would very much like to get to know English football.” 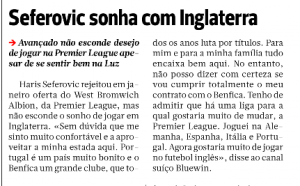 West Brom wouldn’t be disappointed over Seferović’s rejection considering how Diagne has hit the ground running. The Senegalese striker has a goal and an assist in his first four matches, which includes a goal in his side’s 1-1 draw against Manchester United.